My eldest daughter has been learning all about World War 2 at school and this week they had a little party to celebrate VE Day where they wore 1940s clothes and had to take in 1940s food to eat. 1940s recipes were pretty basic, a lot of staple foods were rationed of course, so these honey and ginger biscuits would have been a real treat and you can bet that none would have been wasted. Read on for the full ww2 ration biscuit recipe uk.

Biscuits were a popular choice of sweet treat to make in the 1940s as they didn't require much equipment or time to cook and they would be the perfect treat for adults and children alike. During the war sugar was rationed and honey was plentiful so it would have been used to sweeten instead of using a larger quantity of sugar.

I did some googling to look for 1940s recipes and found a recipe for honey biscuits online which I thought sounded tasty but I was missing one of the main flavour ingredient which was cinnamon. I swapped the cinnamon for ground ginger as I love the combination of honey and ginger and these turned out absolutely delicious.

They are pretty plain biscuits, because in the 1940s there generally wasn't the need to be wasteful with luxury biscuits or fancy decorations. It was a simpler time and food was much more practical. These biscuits would be really portable, and great for children to grab before they headed outside to play or for packing up for lunches.

Preheat the oven to 180 degrees celsius.

Cream the butter and sugar together then add the honey.

Sift in the flour, baking powder, ginger and salt and mix to form a dough

Add a splash of water if necessary to bring the mixture together.

Roll out to ¼ inch thick and cut out biscuit shapes.

Cool on a wire rack. 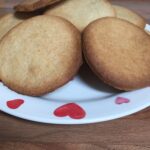 These ginger and honey biscuits use pretty basic store cupboard ingredients and aren't the most glamorous to look at but they taste good and are an authentic reproduction of this wartime recipe, made when people were living on WW2 rationing recipes.

These biscuits will keep for several days in an airtight container, although as with all biscuits they are best eaten as soon as possible. Not that we ever have a problem doing that in our house! If you wanted to make these biscuits vegan you could substitute the butter for non-dairy butter and the honey for golden syrup. You can of course change the spice in the recipe back to cinnamon if you wanted to, I haven't tried it but I love cinnamon so I am sure it would be delicious.

Although they were quite unlike anything they had eaten before, these biscuits went down really well with the children in my daughter's class. Just goes to show that sometimes the old classic recipes are the best! I think that themed days like this in school are such a great idea. It really gives the children a sense of the era if they are dressed up and trying new and different foods from that time. It makes learning a more tangible experience and I am sure they will all remember what they experienced on this day in school.

If you liked this honey and ginger biscuits wartime recipe and are looking for more 1940s recipes take a look at this post by Taste of Home. You might also like...

“This post is part of Twinkl’s VE Day Campaign, and is featured in their Best Wartime Recipes to Celebrate VE Day from Home post”