Before I start this post I want to make it clear that I love being a mum. I know how lucky I am and I wouldn't swap it for anything. Some days being a mum is hard, it's just totally overwhelming and I feel like this, and I'm sure that many of you can relate.

Last night I wanted to give up parenting. By 7pm I'd had enough. I was defeated. I felt deflated, useless and worn down. I was so demoralised I wanted to shout I QUIT and curl up in bed.

I'm not a depressed person normally. I think I'm quite stoic and upbeat but genuinely the kids wear me down some days. Yesterday was a combination of terrible toddler tantrums and pre-teen moodiness. I spent the day trying to entertain a lively, strong willed toddler. He spent an hour on a playdate shouting at his friend and making the other child cry, several times. Then when I tried to pop into a shop he ran amok and it was all I could do to stop him running into the traffic in the road because heaven forbid he actually hold my hand. Buying lunch in Asda was such a monumental effort I seriously questioned whether to feed him at all. Playgroup in the afternoon was another disaster because of course he can't share a single toy and if someone comes anywhere near them he batters them with a baby walker. I can't pop to the shops, chat to my friends or do anything for myself. It's totally and utterly draining.

The afternoon brought the school run where I wrestled with the overtired and very grumpy toddler, trying to save him from running into the road once again. Pushchairs are a no go because they involve a knee to the stomach to be able to prise him in and the screaming writhing effort he makes trying to get out is just as bad as wrestling him in my arms.

The dinner that I made was met with scorn - of course they can't eat it, the pasta was a different shape than usual, it might kill them. But of course they bleat mercilessly for dessert. Once again I found myself scraping food into the bin and wondering why I bothered cooking at all, I may as well just empty the ingredients into the bin at the start and save the effort and whinging.

I then suggested to my eldest that she do her homework after dinner instead of watching YouTube on repeat. Bearing in mind she'd probably watched 3 hours of it already today over breakfast and dinner. So off she went to 'fake' her homework - using the answer sheet to fill in the blanks. It was blindingly obvious because no one can work out 16 x 243 with no working out. I wondered what I had done to her to deserve being lied to like this. How she could look me in the face and think I was stupid enough to fall for it. What level of disrespect must she have for me?

My head was spinning from my awful day and I just thought to myself, I don't want to do this anymore. Stop the ride I want to get off! So I delegated the little one's bath time to my husband and decided to leave my eldest to it. I quietly informed her that I'd had enough and was going to bed. If she wasn't playing the game then I wasn't either. This of course meant no one was going to take her to football class and she spent the next 30 minutes sobbing loudly at the top of her voice about how awful her life is (which in all honesty is what I wanted to do!)

If I look back on the day, I wonder what I could have done differently? Why is my son such an absolute terror at times? Should I fight to control him or would leaving him to run amok be easier? Should I stop taking him out with other children? Should I send him to nursery an extra 2 days a week to make my life easier?

I never know what to do about mealtimes, which are always horrid. Should I let them just eat the junk they crave so badly? Or should I carry on the battle over eating healthily. Should I pander to their pasta shape requests?

Should I nag my eldest to do her homework? Should she be punished for not doing it by not going to football or is that cruel? Now she's 10 I find myself doing things for her I don't think I should have to - like nagging her to wash and brush her teeth and hair. Her room is a pit I find myself tidying everyday because it's exhausting nagging her to do it. Should I just leave her to it now? If she doesn't want to brush her teeth then that's her choice?

My head is spinning with these questions. I'm constantly questioning myself, am I doing the right thing, am I approaching this the right way. I'm a mum and there is NEVER a day off. There's no chance to breathe and link and recuperate. Weekends don't exist to me, they are just an extension of the week. There is no reprieve, no rest and no gratitude for what I do. Sometimes I want to just stop the ride and get off but of course I can't. If I was feeling in a more positive mood I might say that today is a new day, another chance. But really it will probably be a case of same sh*t, different day; the ride trundles on and there is no escape.

Did this post resonate with you? Feel free to share with your friends or Pin it for later... 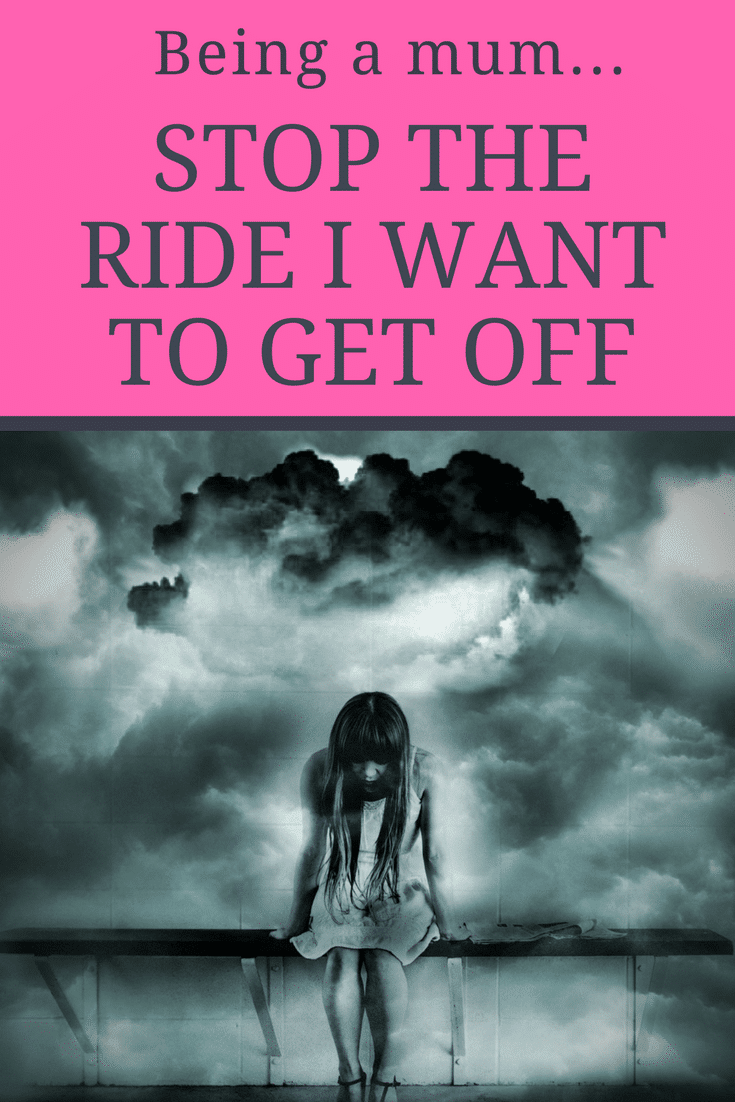