Does your little one love Peppa Pig? My girls were both obsessed and we have spent a lot of time watching Peppa and her friends over the years! They loved it so much that we took them to Peppa Pig World in Paulton's Park a few years ago and they both absolutely loved it!

Fast forward a few years, we have a new little one who likes Peppa Pig and we were really pleased to be invited to see the new Peppa Pig World expansion and the two new rides there - Grampa Rabbit's Sailing Club and The Queen's Flying Coach ride.

The girls were so excited to go that they were up at 6 in the morning, ready and dressed! They had looked online and planned what rides they wanted to go on and they were really excited to be one of the first people to try the two new rides!

We arrived at Paulton's Park at about 10.30 and headed straight off to the grand preview area to see the new rides. The children were delighted to be given a goodie bag and there were complimentary drinks and cakes which was a lovely touch.

The first ride we went on was Grampa Rabbit's Sailing Club. It is such a lovely ride, you get into a round sailboat and it's a gentle ride around. Four people can fit into a ride and babies can sit on an adult's lap. It's a lovely ride for the whole family.

We then tried out The Queen's Flying Coach Ride which was another fun family ride. All five of us fit into a carriage and it slowly goes around. You get a great view of the park from up there! Again, little ones can go on this ride, they can just sit on your lap. 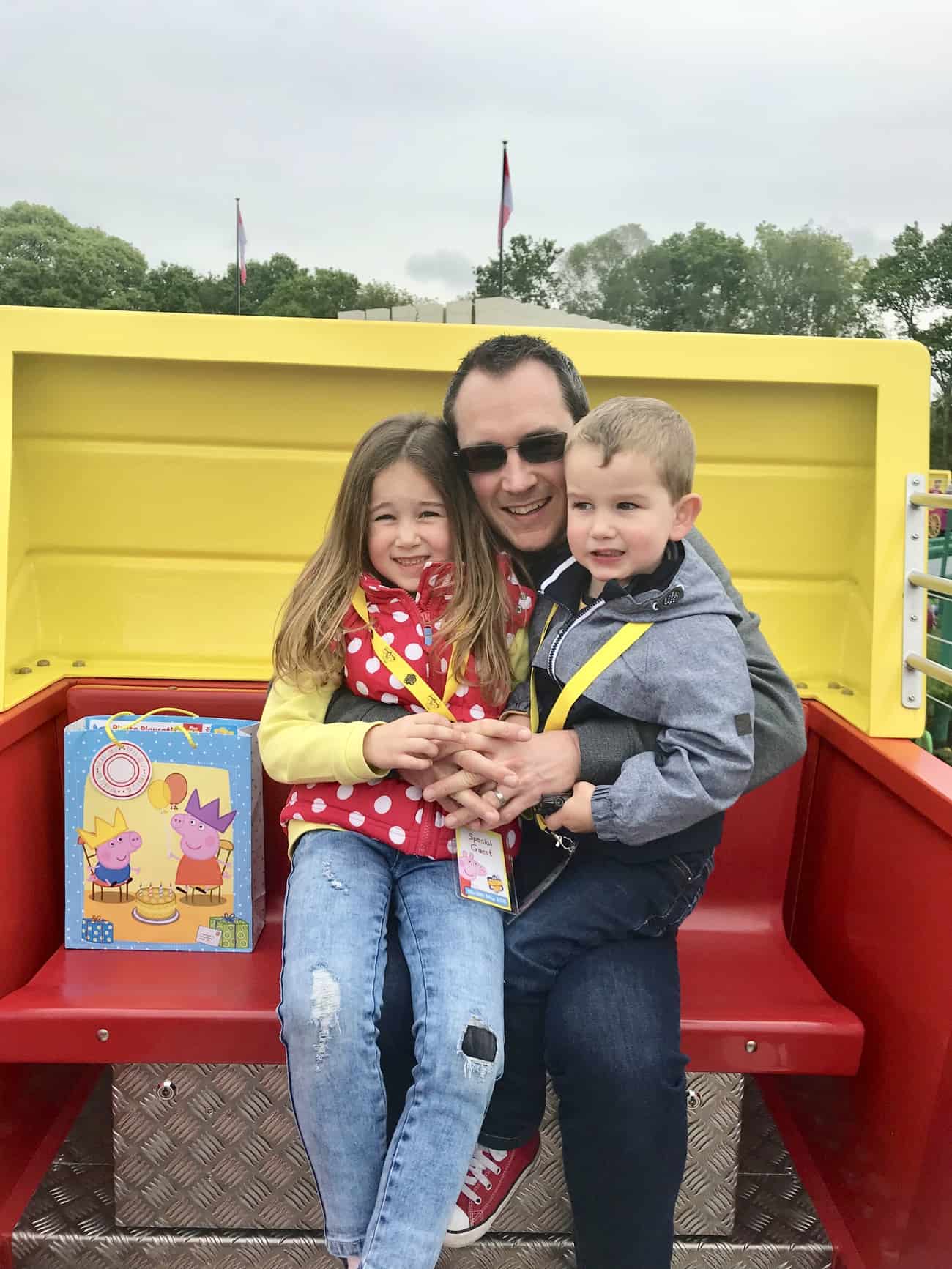 We loved both these rides, and the children did too. They are nice and slow so great for little ones and they will love seeing all their favourite characters. The two new rides are open to the public this coming weekend.

Afterwards we headed out into the rest of Peppa Pig world which was just as wonderful as I remember. There's something really special about watching your children's favourite show come to life in front of their eyes. The dinosaur ride was a big favourite and it was really cool to be able to go into Peppa's house too!

We also got to meet some of our favourite Peppa Pig characters in Peppa Pig World and Little Boy and J were delighted to be given the special task of guiding Zoe Zebra! 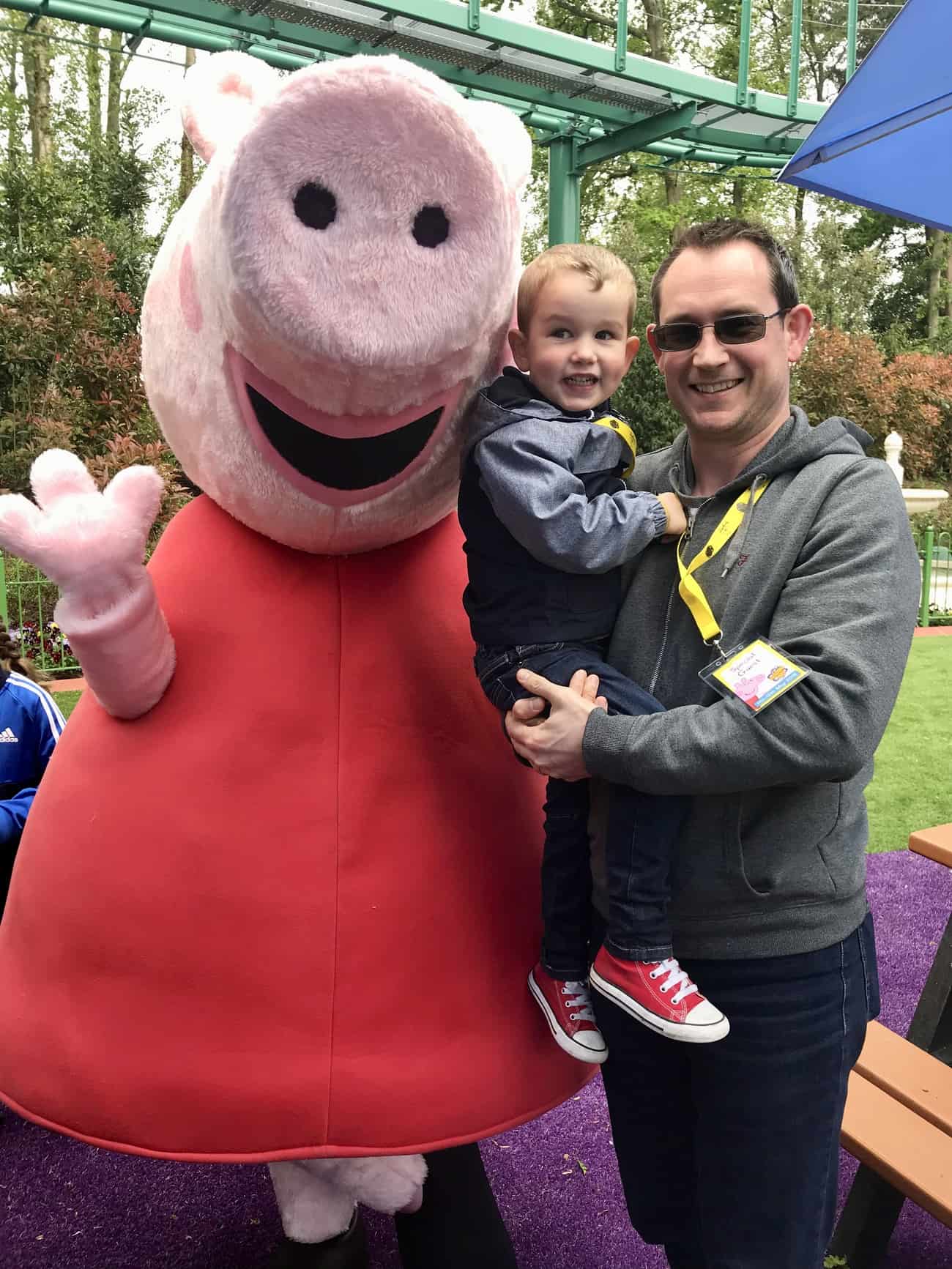 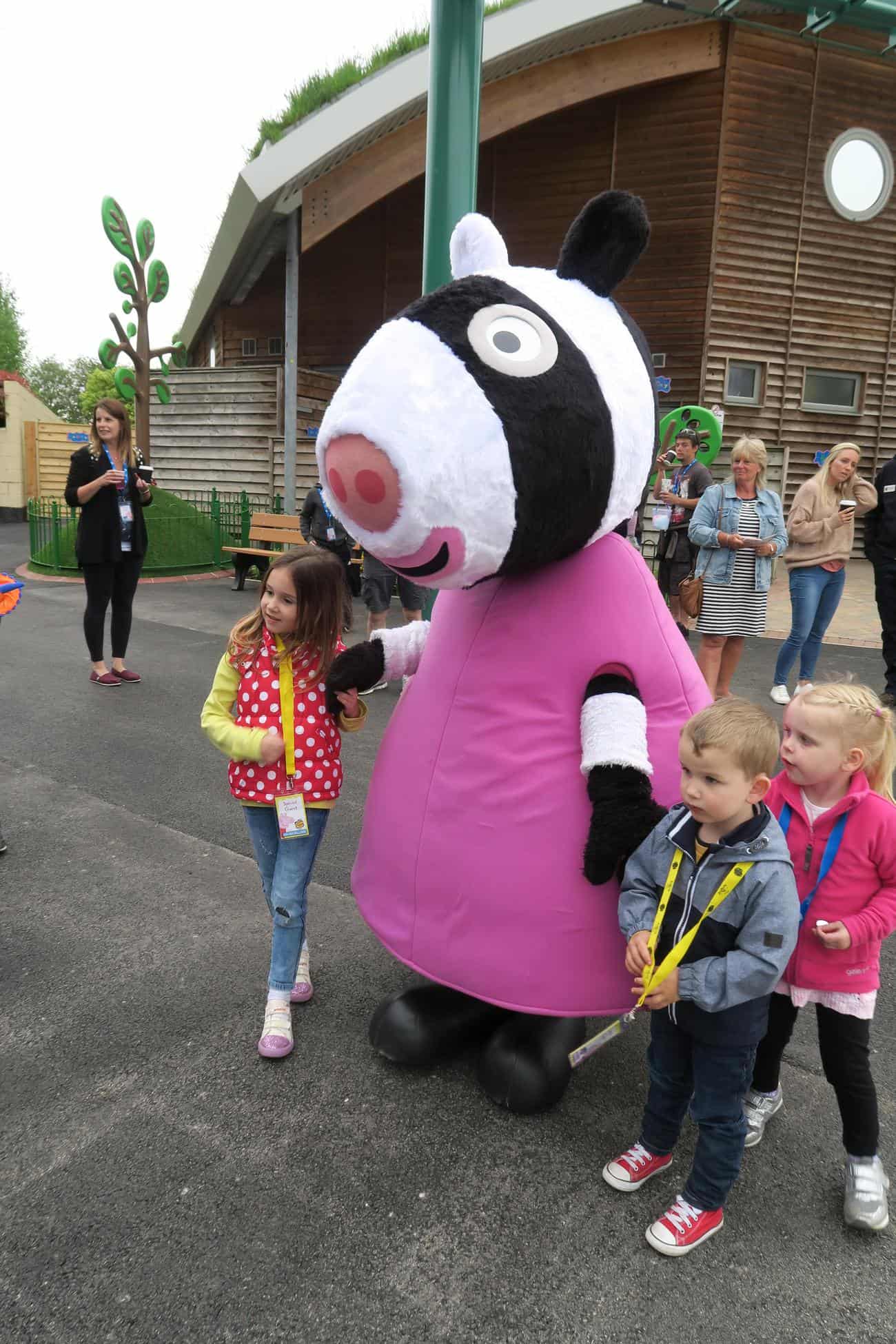 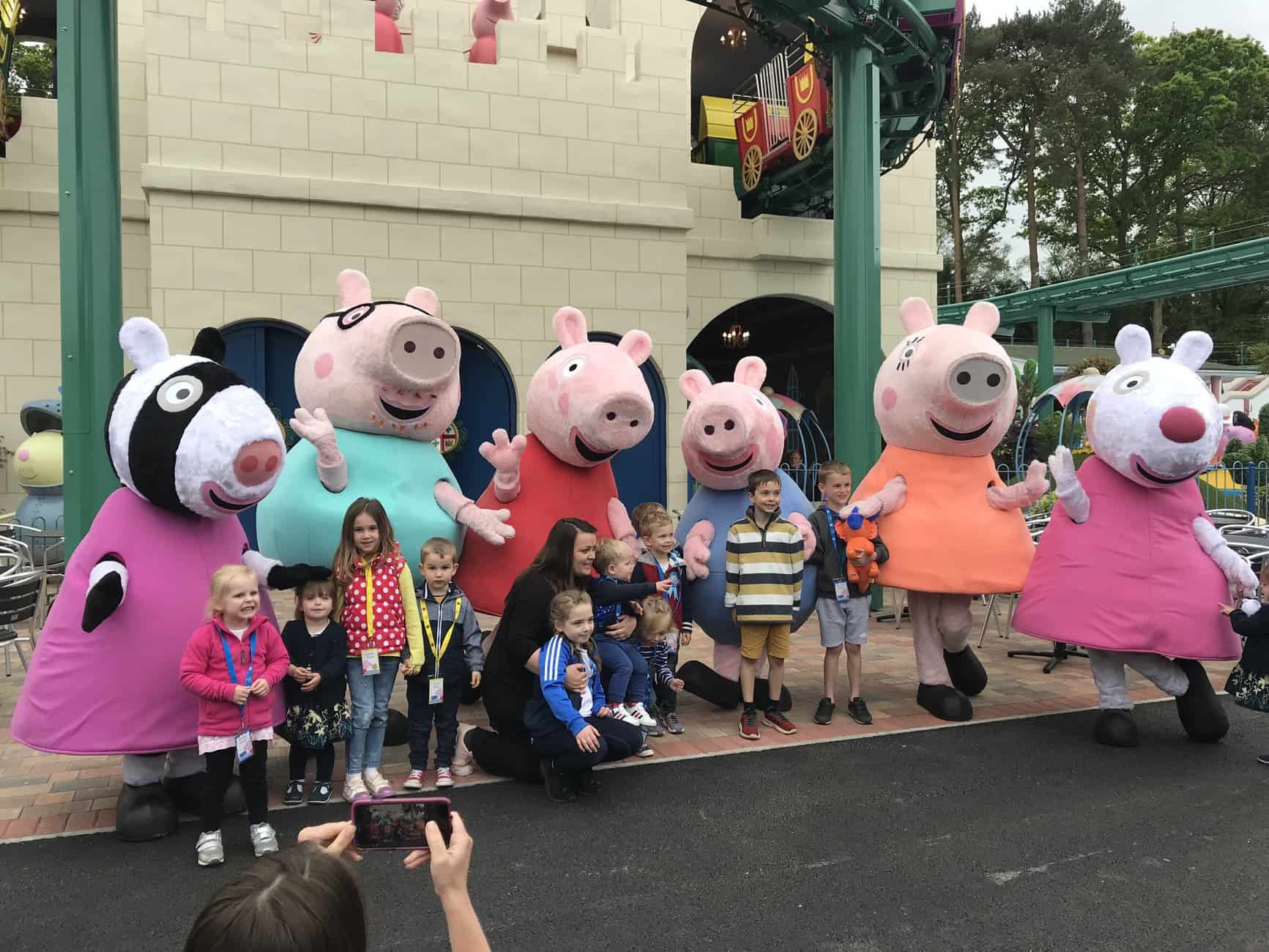 The great thing about Peppa Pig world is that it is located within the bigger Paulton's Park so you have a whole theme park of other rides to go on when you are finished in Peppa Pig World. It's perfect for families with older and younger children like mine. E (11) spent two hours with Daddy going on all the fast rides while I entertained the younger two. There were plenty of rides both in Peppa Pig World and Paulton's  Park that I could ride with both of them and we had lots of fun in those two hours. We loved the carousel and the train was great too. There is a new area called Little Africa too where we saw meerkats, giant rats, hedgehogs and pygmy mice as well as lots of other animals. I couldn't get Little Boy out of there, he was fascinated looking at everything. 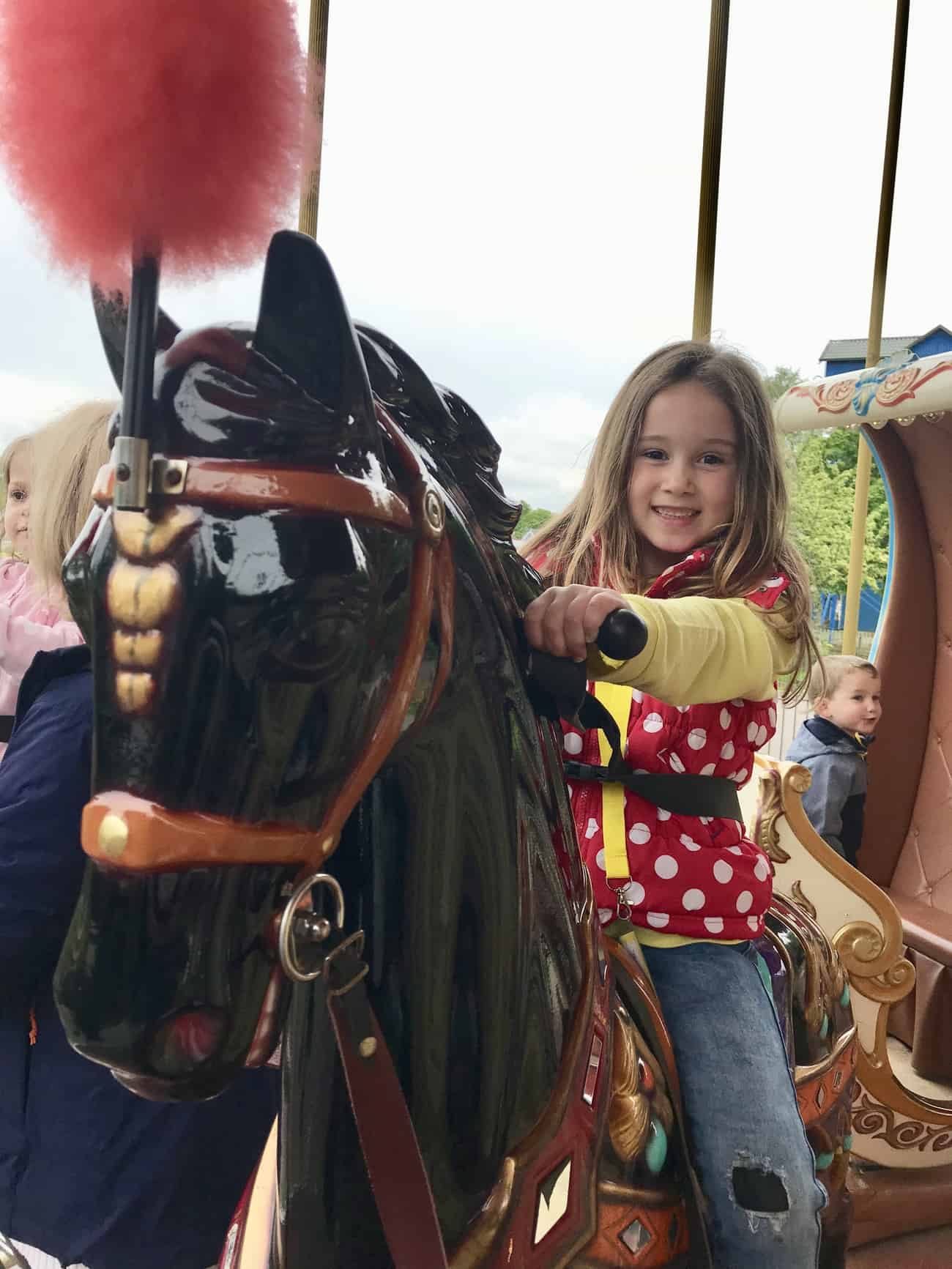 There are plenty of places to stop and eat, we took a picnic and ate it on a lovely bench with the company of a duck! There are also lots of restaurants to choose from if you prefer. In the afternoon we stopped and had a coffee and cake break - they even had soya milk for my coffee! At the end we took the children through the gift shop which I must say was very reasonably priced which was a lovely surprise. We gave them £5 each to spend and they found a couple of toys each which was great.

We had the best day at Peppa Pig World and Paultons Park. I'd definitely recommend visiting there with your family. It's the perfect family day out. We made a video of our day out - you should watch it if you want to see the new rides in action and follow our fun day out!

A big thank you to Paultons Park and Peppa Pig World for inviting us and providing us with free entry to test the new rides. We had an amazing day. All opinions are honest and our own.
Pin this post for later... 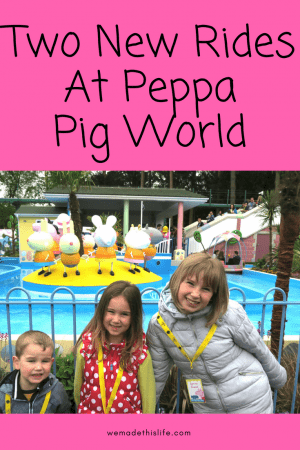