A silver wedding anniversary represents 25 years of marriage, which is an impressive achievement by any standards and especially so these days, with divorce rates at an all-time high.

If you know a couple about to celebrate this huge milestone, then you need to be thinking about silver-themed gifts for them.

Go retro with a silver wreath

The origins of the silver anniversary are in Roman times, when husbands would crown their wives with silver wreaths after 25 years of marriage. If the union lasted another 25 years, the lucky ladies received a golden headdress as well. It doesn’t have to be a headdress, it could be a bangle or a necklace, as long as it’s made of or at least plated with Ag!

Surprise the pair with some silver bullion

After 25 years together, the couple should have amassed some joint assets, but more is always welcome. Give them some silver bullion from Golden Eagle Coins – maybe one coin for every year together – as a gift that’s also an investment or an heirloom for the younger generations.

A photo canvas dedicated to the wedding date

You could order a customised photo canvas bearing the date of the wedding and some special facts about that day. Popular facts include the price of a pint of beer, important news events, birthdays, the number one song and the most popular film. Top this off with an image or two and you’ve got an interesting keepsake and conversation-starter.

A silver bangle with inset birthstones

This could be for the wife alone or for both halves of the couple. A silver wedding tends to be a classier affair than lots of the others, as silver is an understated metal, so a plain band is best, with a simply-cut stone set into both ends. Using birthstones helps to personalise the bangles and to add some interest.

Silver is too soft to be used in luggage tags on its own, so silver-plated is best here. If the happy couple is planning to set off on a round-the-world trip or a second honeymoon somewhere exotic, then matching his-n-her tags will do the job nicely.

It’s easy to lose sight of one another after a quarter of a century, children, house moves, promotions and everything else that life can throw at people. This anniversary is a great opportunity to stop, relax and spend some quality time together as a couple, rather than as mum and dad, boss, dog-walker, cook and chief bottle-washer! A long weekend or even a week’s break somewhere out in the country or overseas is just the thing to help Mr and Mrs reconnect.

You could leave the frame empty so that the couple can decide which photos from their years together make the cut or you could decide for them. Whichever way you choose to present the frame, this sort of gift is more traditional than most, so you might want to mix it up with something more modern or unusual to go with it, like a silver birch sapling. 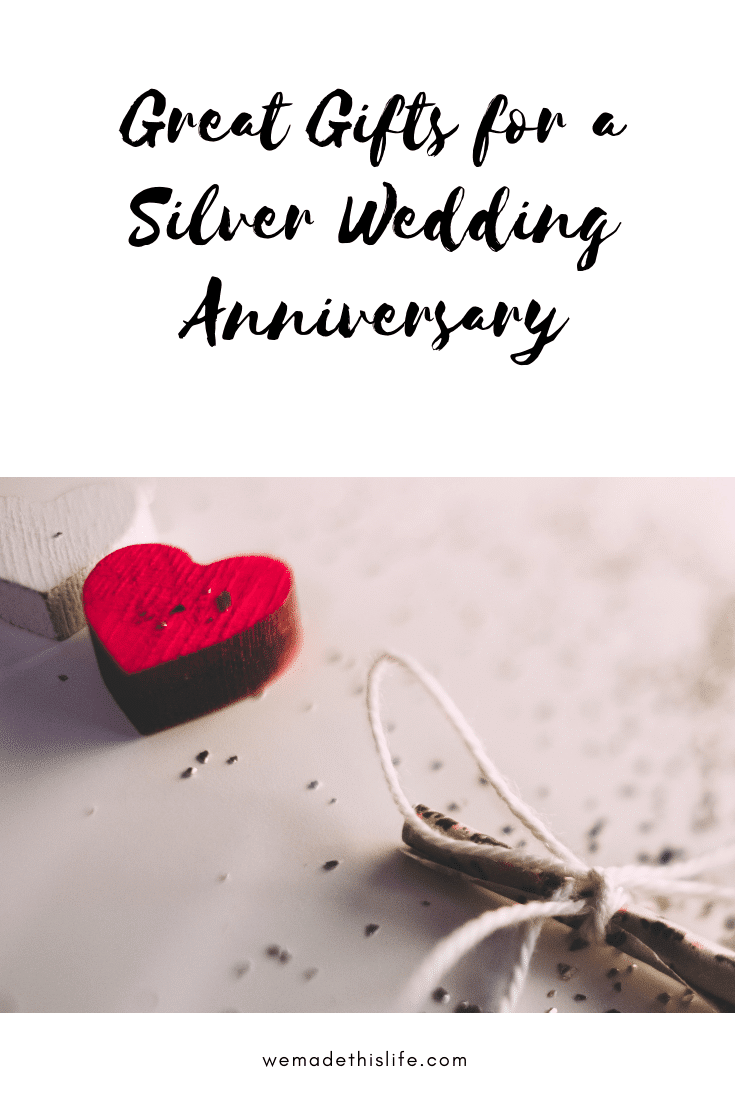