The Snow Queen At The Sherman Theatre Cardiff - A Review

Disclosure - we were invited to the press evening for The Snow Queen at The Sherman Theatre Cardiff and given complimentary tickets for the purpose of this review. All opinions are honest and our own.

It isn't Christmas without a visit to the theatre and this year's offering from The Sherman Theatre is The Snow Queen. Of course The Snow Queen is the Hans Christian Anderson classic that inspired the hit Disney film Frozen.

If you haven't been before The Sherman Theatre is located in Cathays in Cardiff (literally three minutes walk from Cathays train station) and is such a wonderful theatre, we have enjoyed many shows there in the past and I would especially recommend the children's shows there as they are so relaxed. It is decorated out for Christmas at the moment and has a cafe / bar area which makes it the perfect place to meet up with friends or family for a festive evening out.

The Snow Queen starts in a welsh home where a boy (Morgan Llewllyn Jones) and his babysitter (Grace O'Brien) are sheltering from the storm during a power cut and she starts to tell him the story of Gerda, Kai and The Snow Queen. The scene is atmospheric as snow pours down outside the window and we find ourselves drawn into the story as much as the boy is.

We see Gerda (Anni DAfydd) and Kai (Ed Parry) playing in the snow before a fight where some mean words are said happens and Kai runs off into the snow, following the call of the alluring Snow Queen. Gerda feels terrible for the argument and sets off to find him, leaving her comfy warm home and luxuries behind, even sacrificing her new red shoes in her hunt for her friend. 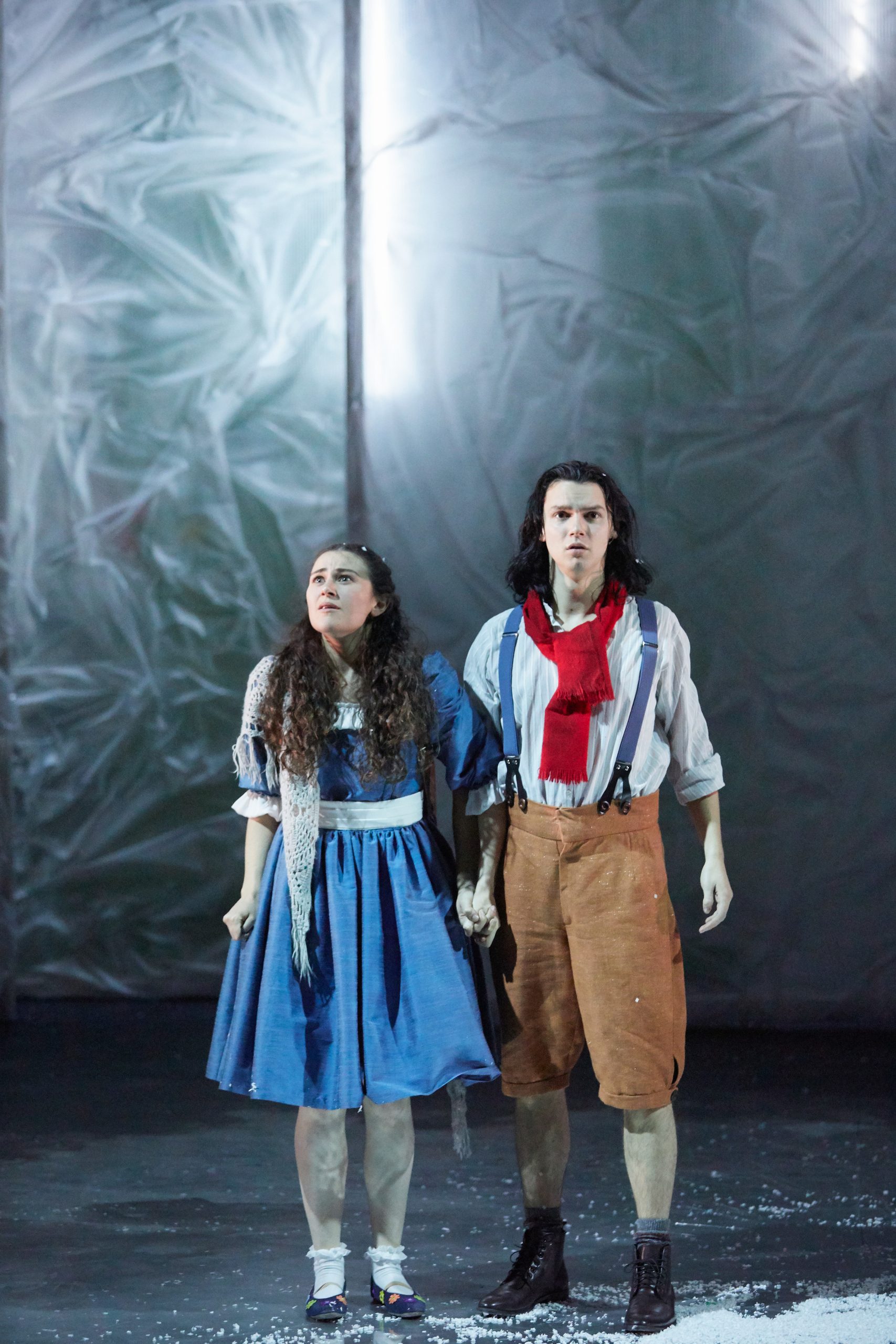 Along her journey she meets various characters, Mrs Gardener (Rachel Nottingham) in her world of forever summer and her hilarious flowers. This was one of the funniest parts of the show, the flowers were real characters and drew several laughs. We learn that you can't enjoy the summer if you have never experienced the winter and Mrs Gardener learns that she has friends in the flowers that surround her. 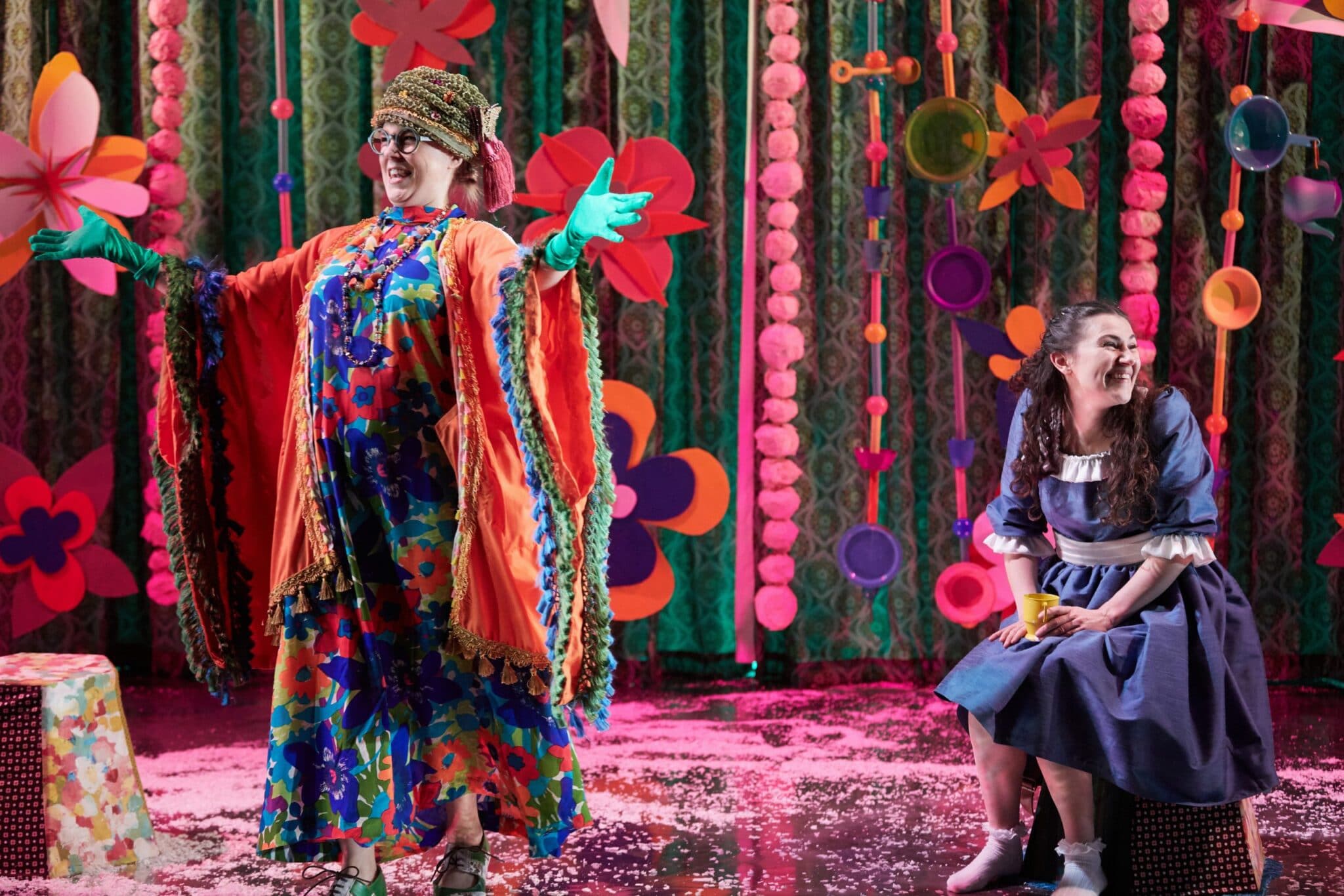 Next we meet a crow (Jo Servi), which was my favourite character. The puppetry was very effective and creative and brought an extra element to the show. The Crow helps Gerda along her way, albeit on the wrong path at the beginning but he sacrifices himself to share the news of Kai's location with her before he succumbs to the cold weather. 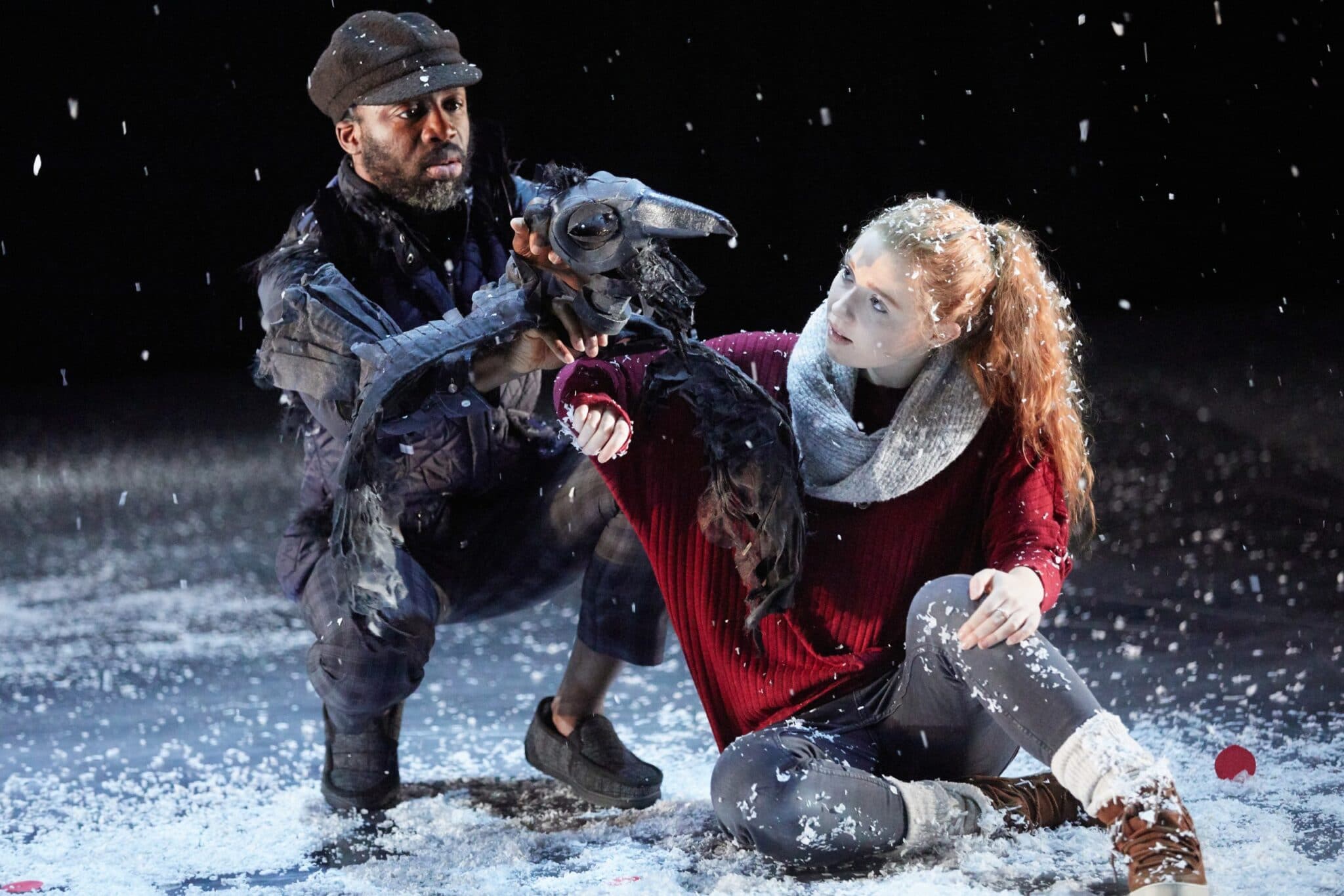 The crow first leads Gerda to the Prince who doesn't know who he is. He realises that riches and power aren't everything and because of Gerda gives it all up to go and find himself which is very inspiring.

Next Gerda meets a robber girl (Hanna Jarman) and Bandit Queen and her imprisoned reindeer. Taking Gerda as a "girl pet" we eventually see that the robber girl isn't as nasty as she seems, she is just lonely and trapped. Gerda helps her to see the error of her ways and the robber girl sets Gerda and the Reindeer free.

The reindeer and Gerda travel through the snow to find Kai. The reindeer is a wonder to see, his costume is almost postmodern and he draws a few laughs himself with his funny reindeer noises! 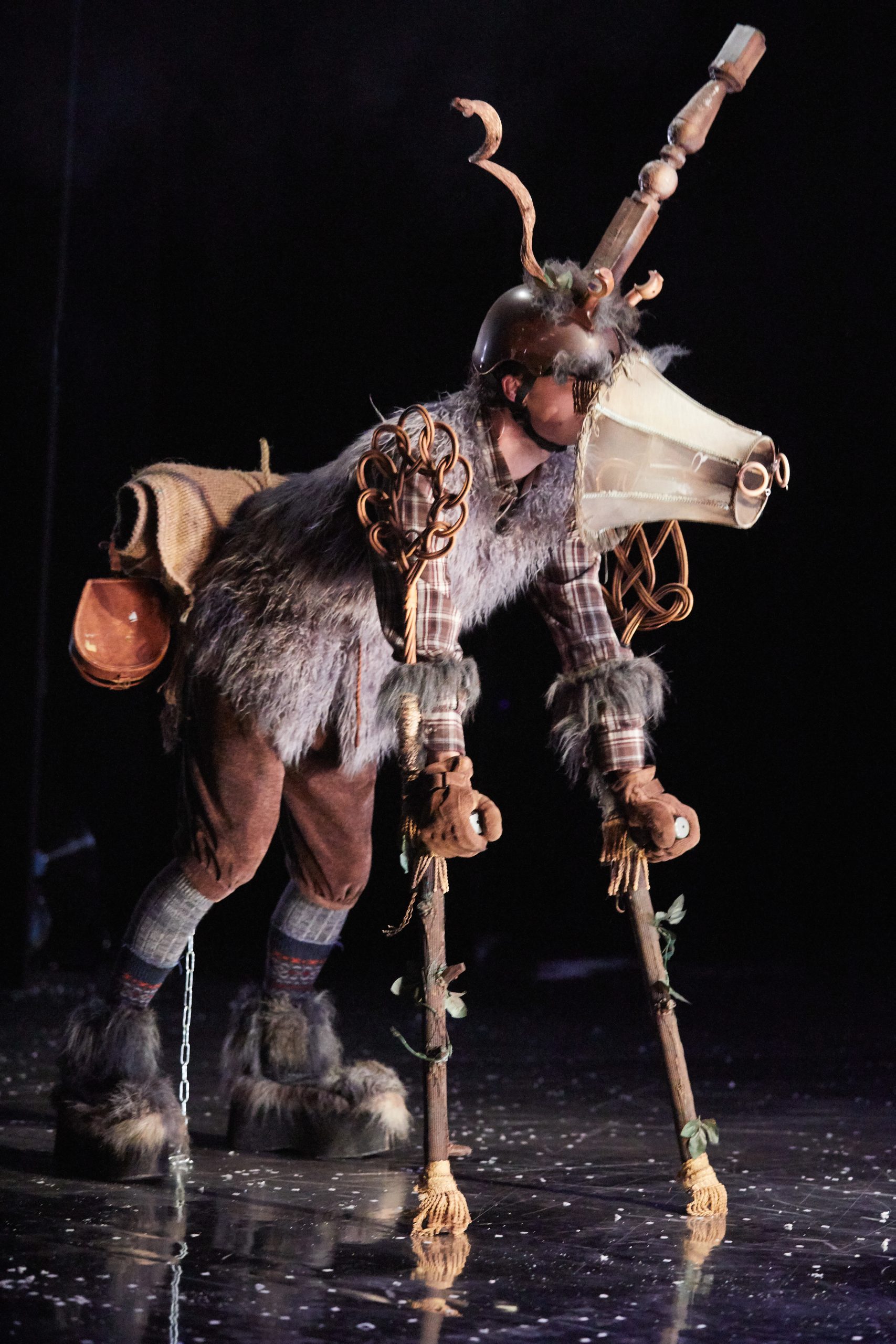 Gerda leaves the reindeer and finds Kai whose heart has been frozen by the Snow Queen. United they manage to thaw their hearts and overthrow the Snow Queen.

The message behind the play is a clear one, and is so relevant today. It is about the importance of being kind and of making wrongs right. It's a brilliant message to put across and a wonderful message at Christmas time.

The set design was magical, and really drew us in and the costumes were spectacular, bright and eccentric. The Snow Queen was dramatic and the lights and scenery at the end was very effective. The snow throughout really added to the atmosphere and made it feel very timely and Christmassy without it being a Christmas themed show.

I really enjoyed The Snow Queen and the girls (12 and 8) enjoyed it too. My 8 year old can be quite sensitive and it was a bit creepy at the beginning with the snow and the Snow Queen's voice and she was sad when the crow got sick but she also laughed a lot at the reindeer and the flowers. I'd say it was more suitable for older children of age 8 and above though for these reasons. If you have younger children you might find that The Sherman Theatres other Hans Christian Anderson offering - The Ugly Duckling is more appropriate. We are going next week so remember to come back to read our review.